Today I’ll show my latest project, which I’ve been modeling and developing on SketchUp for a couple of months. It’s a Lathe made completely with birch plywood. As always, I’ve tried to develop a design that would be economic and simple to build.

I install a single-stage 1HP motor with 1500 Rpm and 0.75 Kw. Using this pulley configuration I obtain three speeds, 800 Rpm for pieces with a wider diameter and the Disc Sander, 1500 Rpm for average diameters, and the fastest speed, 2800 Rpm to lathing small diametre pieces (up to 50mm diameter). It’s within the usual range of speeds for lathing wood.

If you have a different motor or you are looking for other revolutions, you can calculate your pulleys here:

Overall dimensions: 320mm high, 1000mm width and 600mm depth.
Useful dimensions:  can lathe pieces of 450mm long and 300mm diameter. If you need longer, it can be easily modified by lengthening the base of the lathe. 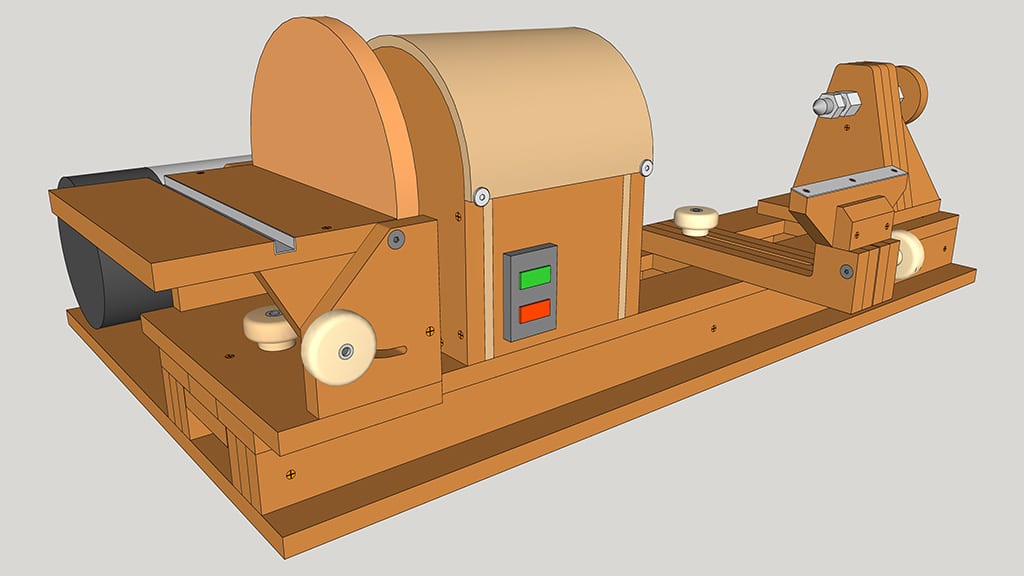 If you are interested in collaborating with my web or building your own lathe, here you’ll find the downloadable plans.

As you can see, I’ve also attached a disc sander on the left side to take advantage of the motor’s rotation. This is the disc sander’s stand, which can be tilted up to 45º, which will definitely come in handy sometimes!

1- How to make a woodworking lathe: 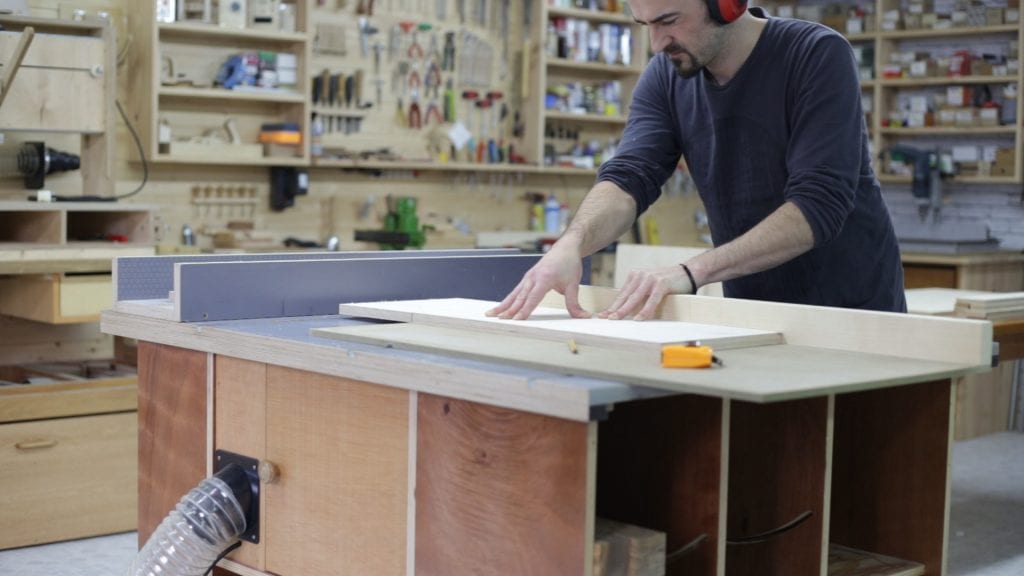 Let’s take a look at how to make it. First we cut all the pieces according to the cutting list.

We apply glue on these three pieces that will function as base for the lathe. First I place a couple of screws so that the pieces won’t move when fastening them due to the viscosity of the glue.

We then finish assembling all the system that will serve as base for the lathe.

Now I’ll attach these two pieces with glue to achieve greater thickness. This is the part where I’ll insert the bearings that will serve as rotation axis.

Once dry, we create a place for the bearings with an adjustable drill bit. I will drill the hole at low RPMs, advancing slowly to avoid burning the wood and the bit.

I make a rebate for the on and off switches, and I finish machining and assembling the rest of the pieces. 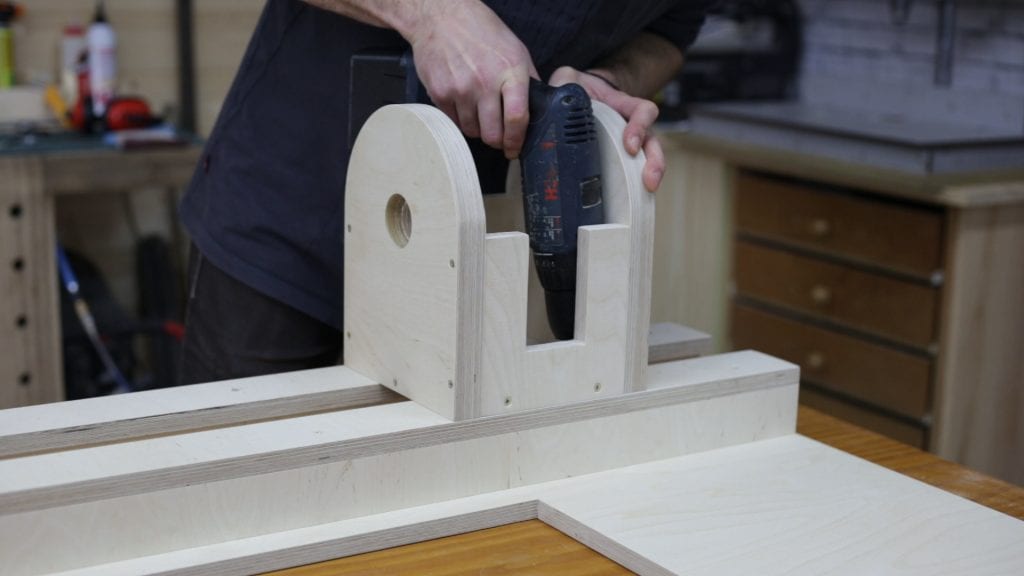 Now I’ll screw the set to the base. Having done that, I apply a couple of coats of spray varnish now that it’s easy, and while it’s drying, I’ll cut the six pulleys, three for the motor and three for the lathe. 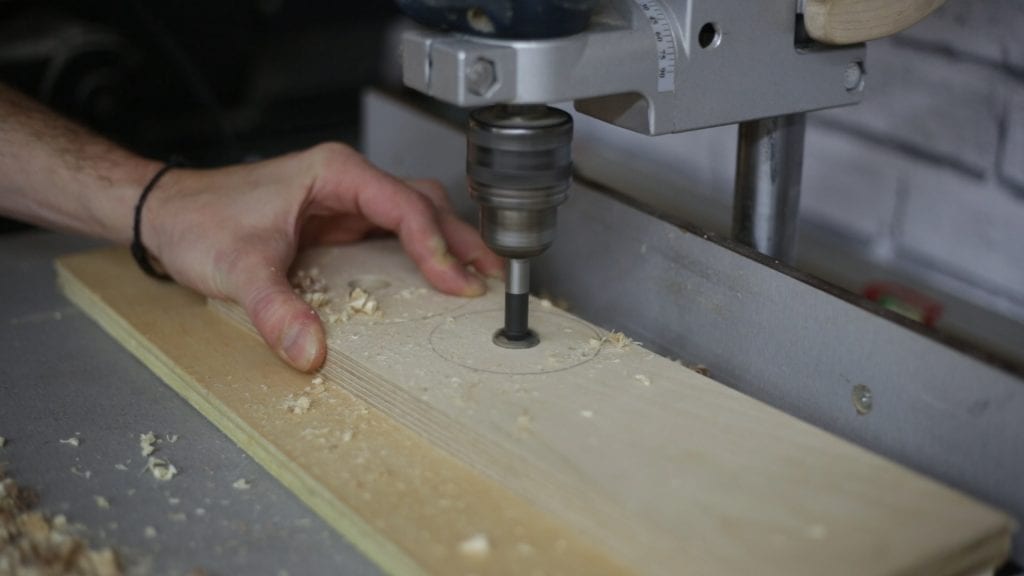 These are the motor pulleys. I’ve drilled holes in them with the exact diameter of the motor shaft. 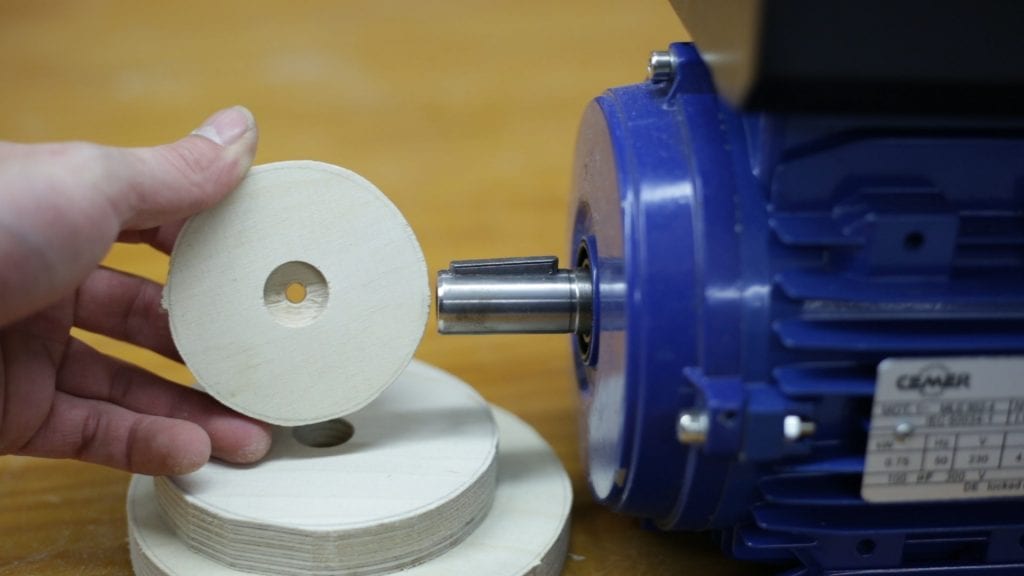 As you can see, the shaft has a slanted part that sticks out that will prevent the pulleys from moving backwards, and at the same time will provide traction.

After machining the pulleys, we insert them in the shaft being careful not to hit them too hard to avoid damaging the motor. Then, I place a screw in front of axis to hold them. Now I will prepare the base for the motor and screw it in its place. Now it’s time to lathe the pulleys. I will start with the widest one. 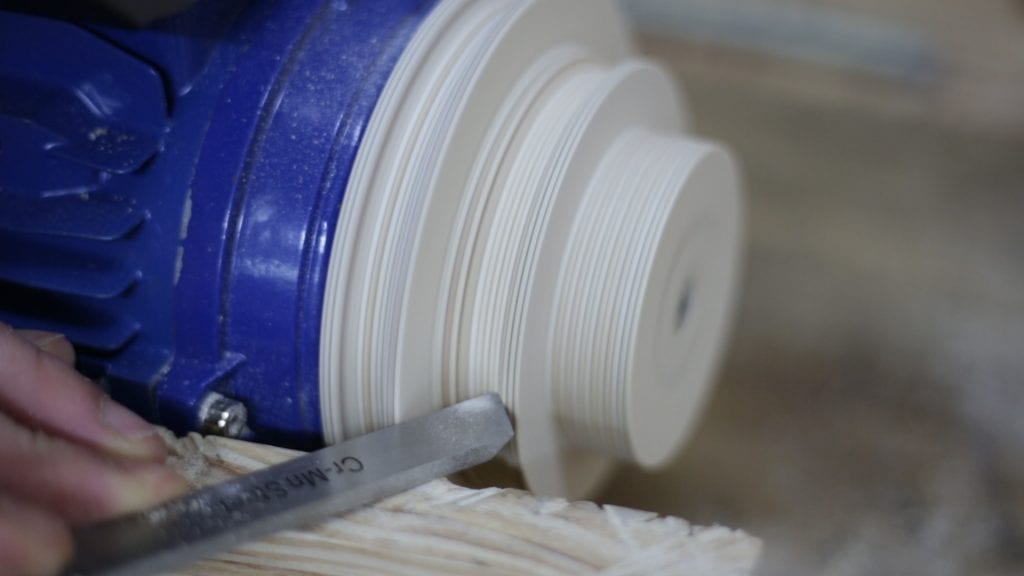 I’ll lathe the groove for the V-belt, I’ll try it little by little to adjust it correctly. We put the bearings in place and attach the threaded rod. I place the lathe’s pulleys and glue them together.

Before we move on, I insert the belt. I place all the nuts and washers, check the measurements, and now I can fasten and screw everything in place. 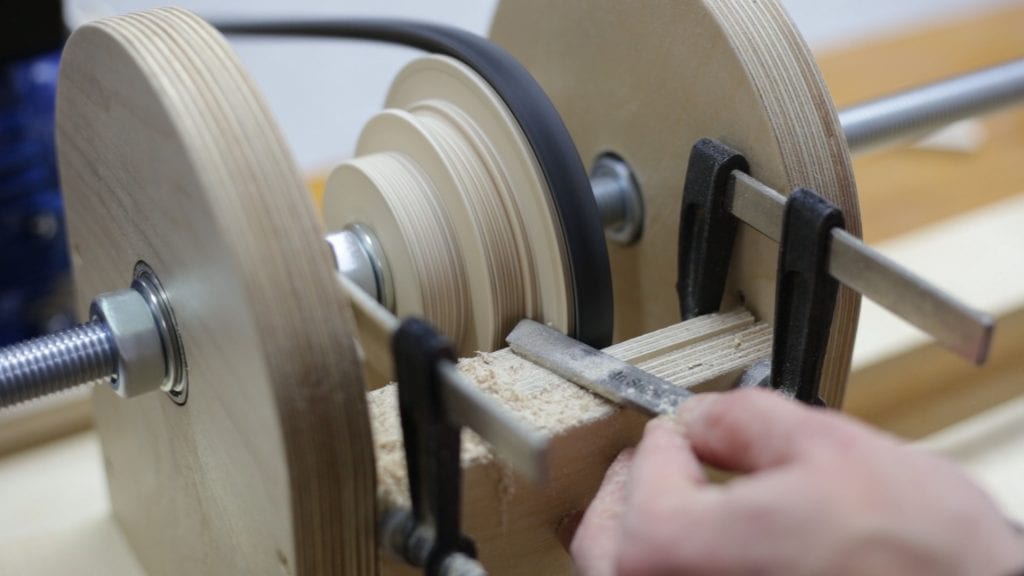 Now I’ll machine the lathe’s pulleys attaching them to the motor, and I’ll take the chance to see if everything is working correctly. These pulleys must be of the same diameter as their motor counterparts so that we can change between them without having to move the motor.

Using an angle grinder I sharpen the threaded rod. Cut this piece that I will use for the lathe’s tailstock, and I do the same sharpen again on this end.


I will begin by making the tailstock and toolrest. First I’ll cut and glue these two pieces for the tailstock. Just like before, I’ll use a pair of screws in addition to glue. Now I sand the edges.

The third piece will only be screwed in so that it can be removed later. I machine the base and screw it to the three pieces. 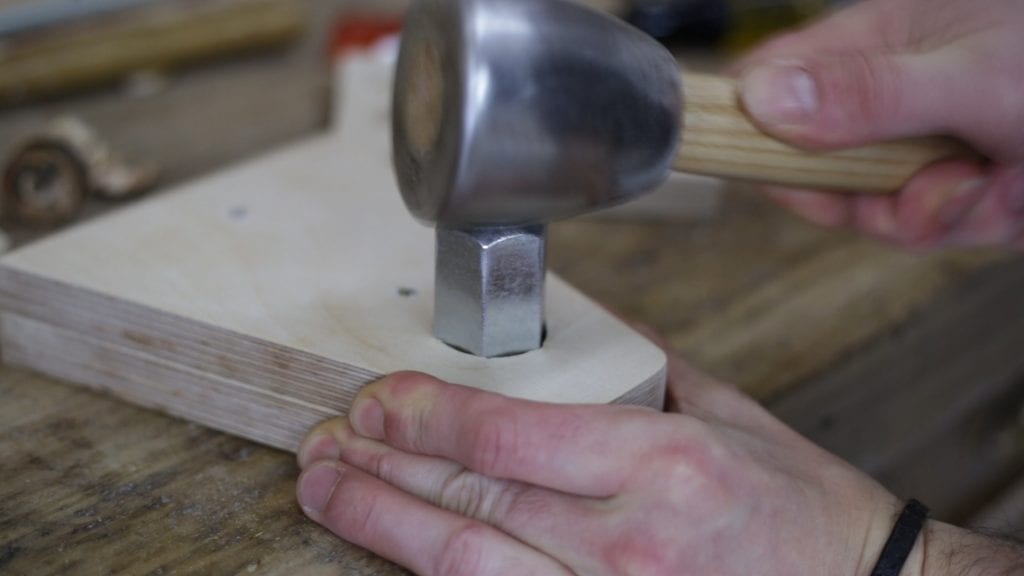 At this point I can glue the three pieces. I machine and screw in these reinforcements. I attach the handle which I’ve drilled with a bit with 1mm less diameter than the threaded rod. 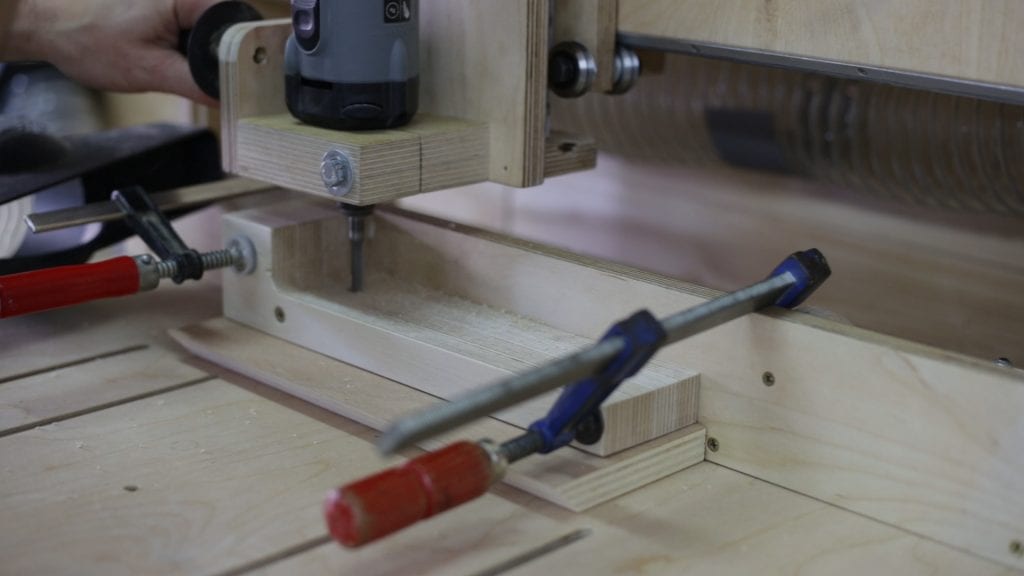 Now I machine the pieces for the toolrest and glue them together like before. With the 3D Router, I machine this fitting groove. I make a hole here to insert a piece of threaded rod that will allow me to adjust the height of the toolrest.

The bit must be 1mm less than the rod so that it will fit in. Then I make holes with a bit of the same diameter as the rod. After machining all of the toolrest’s pieces, I cut and glue a few pieces of P120 sandpaper with contact adhesive.

This will help us lock the two accessories at the desired position. I’ve prepared all the knobs, you can see how to make them in this other video.

I’ve also installed the switches and an emergency lock. I used this model I had in my workshop, but if you have to buy one. I recommend using one of this type. 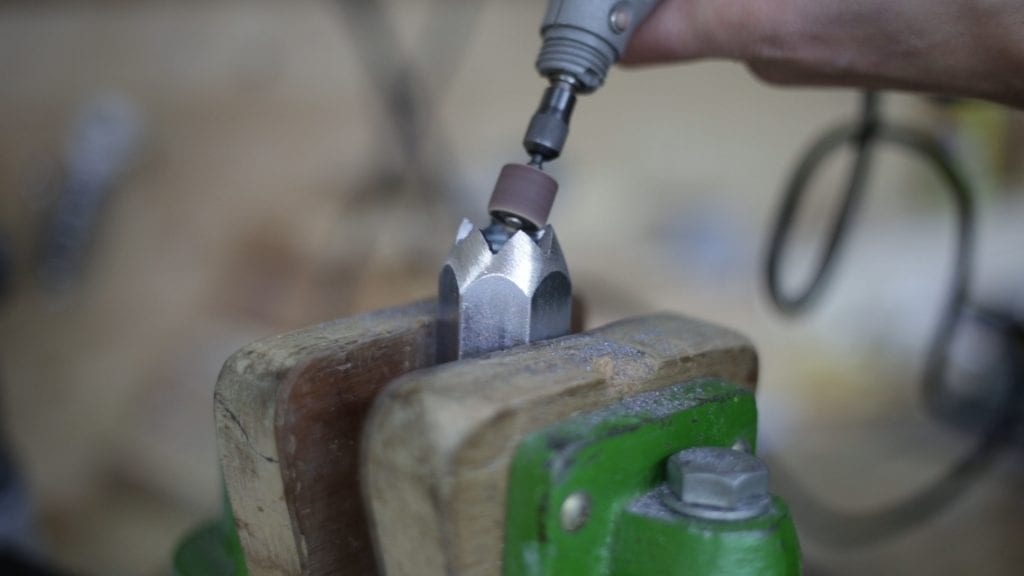 Now I put the motor in place. I’ll use two flat hinges to make it turn. I’ll use another coupling nut to make the drive centre. Then I mark it like this and cut it with a hacksaw. Now I’ll make a bevel with the angle grinder to sharpen the tips. I finish the job with a file and a Dremel. 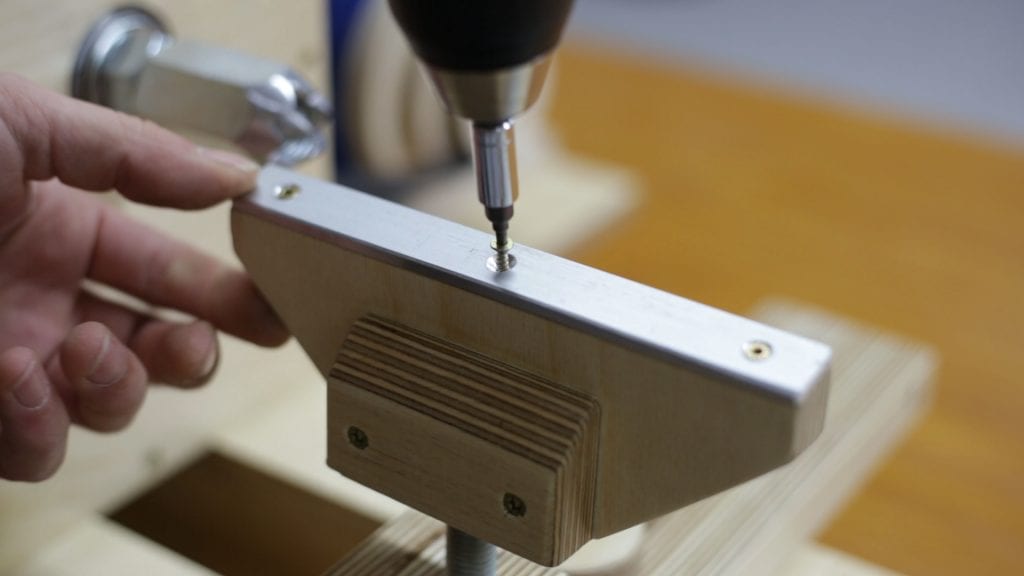 I drill and countersink this piece of aluminium to protect the toolrest.  And finally, I’ll do a little test with a piece of ash wood. After marking the centres, I put it in place, tighten all the knobs and adjust the toolrest’s height. Since it’s not a wide piece, I’ll select the pulley combination with the most RPMs.

Seems everything’s working as it should! It runs smoothly, without vibrations, and the drive centre isn’t slipping off.

In this third and last video I’ll make the disc sander. 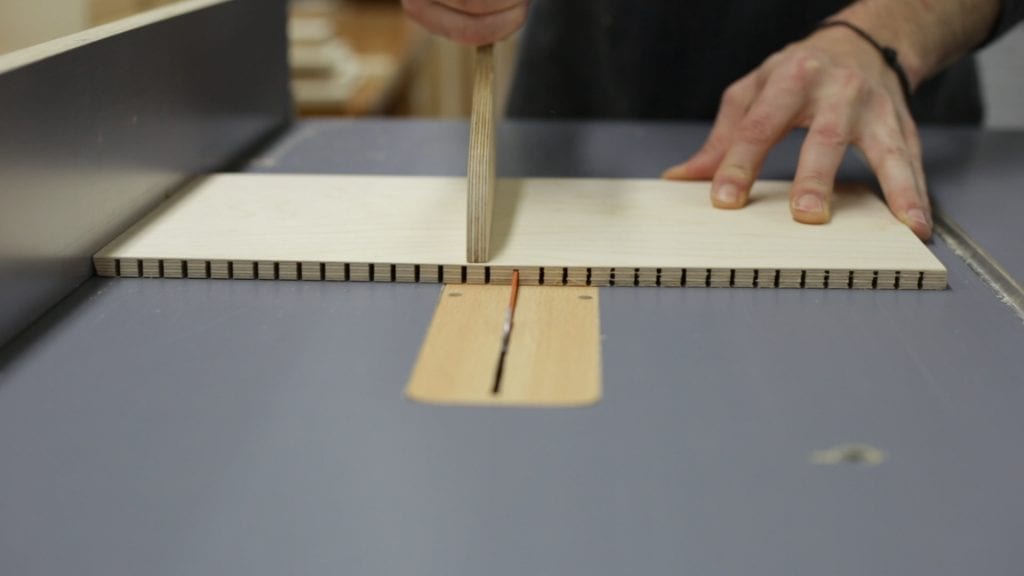 I’ll begin by cutting and machining the lathe’s cover. In order to fold it, I’ll make some cuts on the underside, leaving only 1.5 milimetres uncut. It’s important that the grain on the final layer of plywood be perpendicular to the cuts, so that it won’t break when folding.

I’ll dampen it a little with water to make the process easier. I try folding it before using glue and it seems to work. 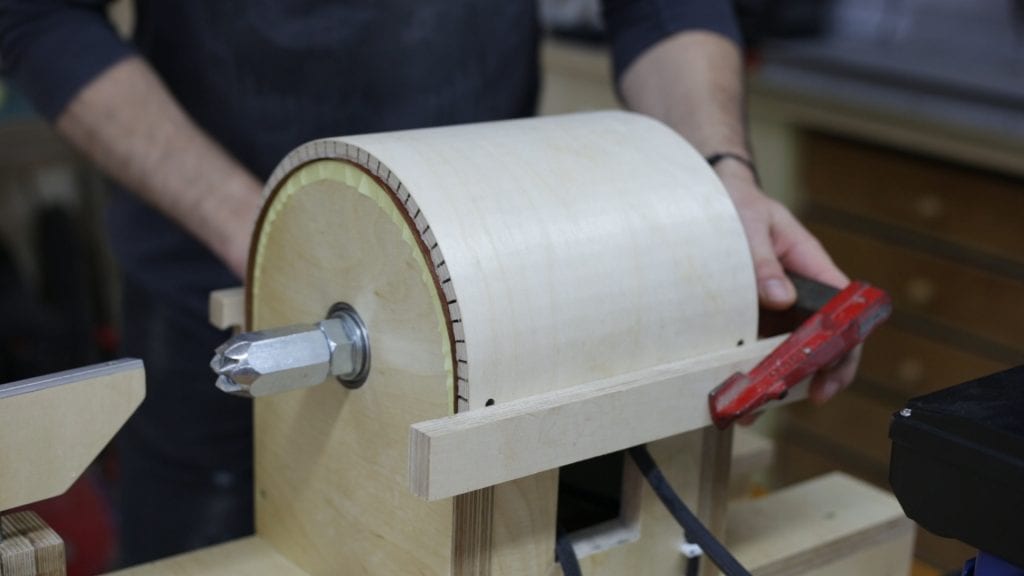 I fill all the holes with glue and I use glue on a 0.4mm thick veneer of any kind of wood, put it in place with the help of these plywood pieces and clamps. Ideally, for this kind of operation we would have a mould and countermould, but with this method we can also achieve decent results.

I cut this hole for the belt with the table saw. Then I mark the positions of the screws and drill them, I’ll use a drill bit 0.5mm smaller than the screws.

Now I’ll start working on the disc sander. I mark its circumference on the board and cut it. I use a bit 1mm less wide than the threaded rod when drilling. By rotating the wooden disc when inserting it, I’ll create a thread on the plywood itself allowing me to remove the disc when necessary.

Some of you might be thinking, the disc should be tightened in the opposite direction to that of the thread so that it won’t come loose when working… but in this case, it’s impossible.

At first I considered installing two switches to change the rotation on the engine, but eventually I thought about fastening the disc itself against the washer on the end and since the thread in the plywood offers greater resistance than a metal nut, it shouldn’t be a problem. 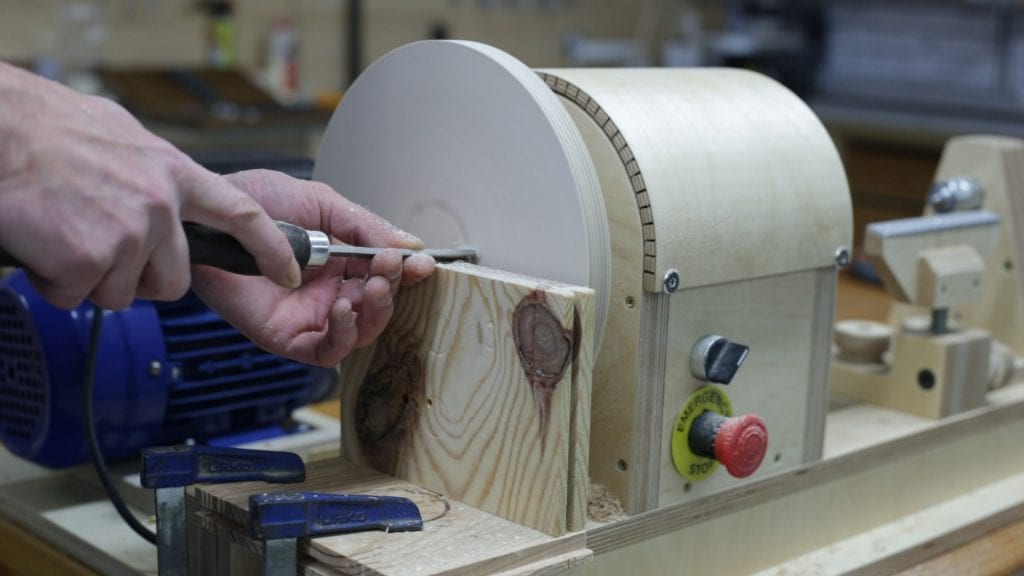 I will lathe all the pieces to reduce any potential vibrations. Also on the front of the disc, to avoid oscillations and make it run smoothly and then I’ll sand the edges of the disc for safety reasons.

As you can see, tightening and loosening the disc on the threaded rod offers a fair amount of resistance.

I’ll start machining all the pieces of its tilting table. The disc must be removable for when we lathe at high RPMs. If we don’t remove it, the vibrations could be excessive for lathing due to the diameter of the disc itself.

Therefore, I’ll use the same fastening system I used for the tailstock and tool rest allowing me to easily remove the tilting table and disc.

I mark the holes for the screws that will serve as rotation axis. In this case I will use a drill bit 0.5mm less wide than the screw. I make a groove to insert a U-shaped aluminium profile to slide the Miter Gauge on top of. I’ve machined both pieces that will allow me to lock the table at an angle and screw them in like this.

I make sure the highest position is at a 90 degree angle between the table and the disc. If that’s not the case, I can adjust it on the table disc groove. 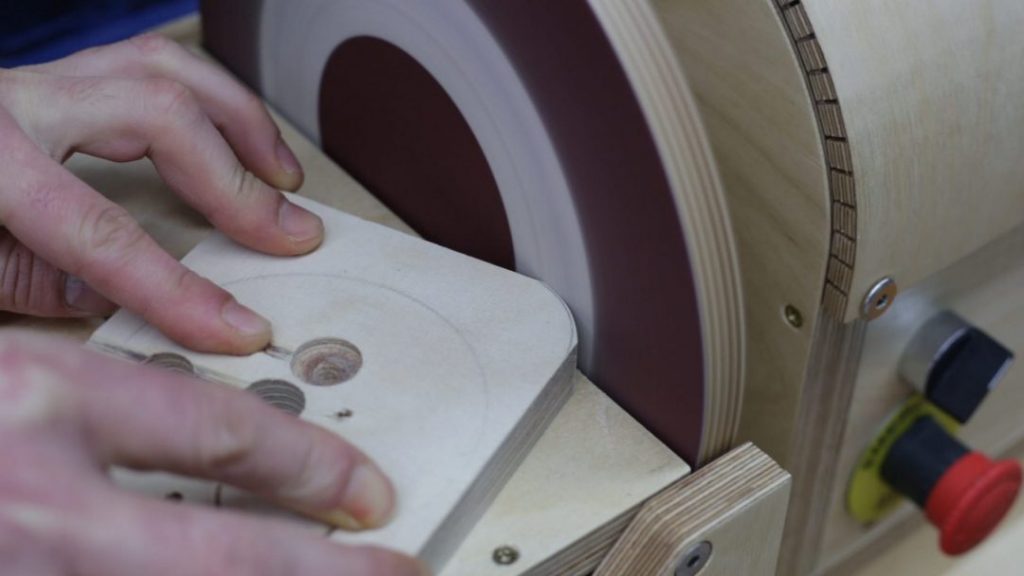 Now all that’s left is to cut and machine the Miter Gauge and check if everything is working as intended! 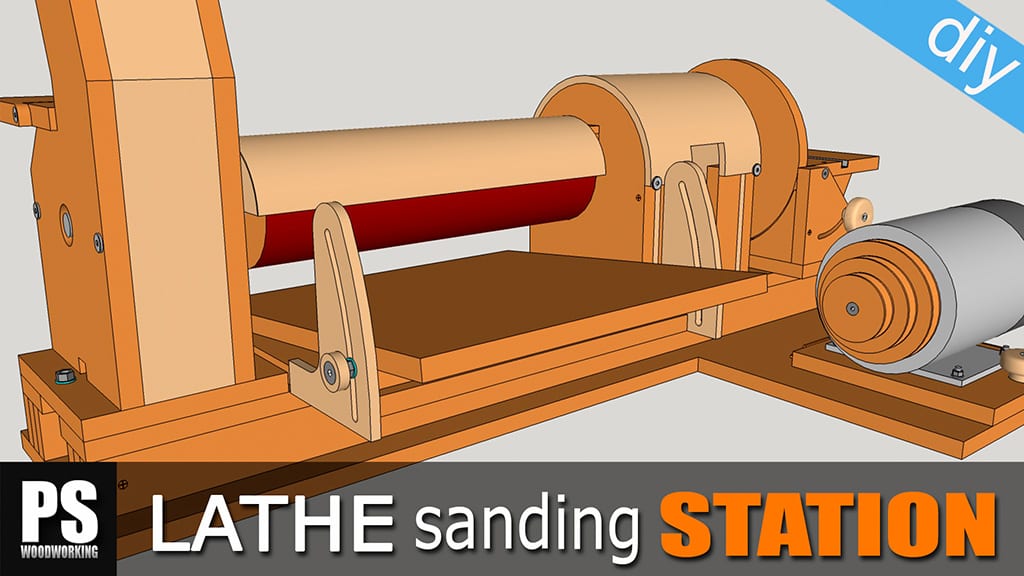 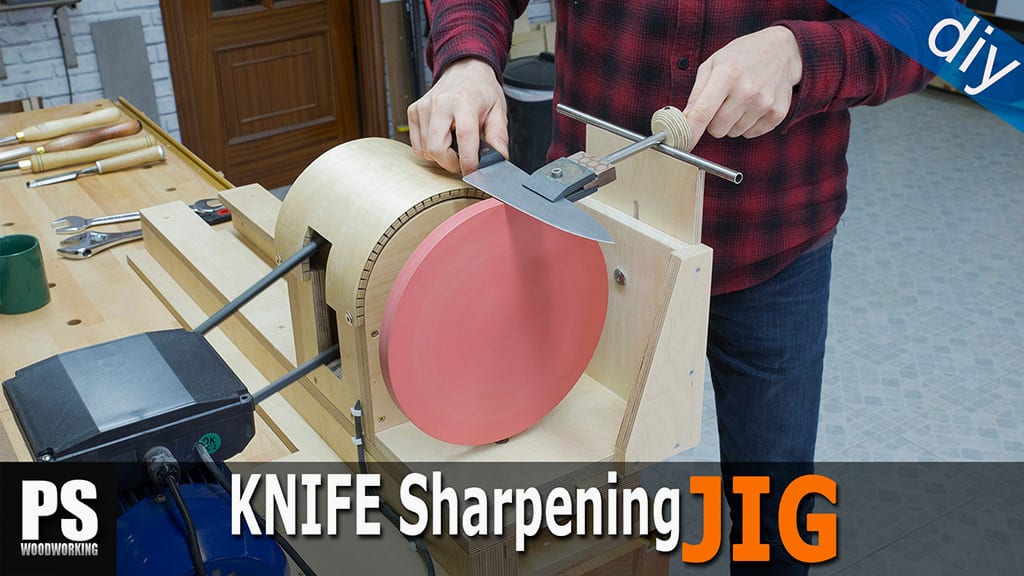 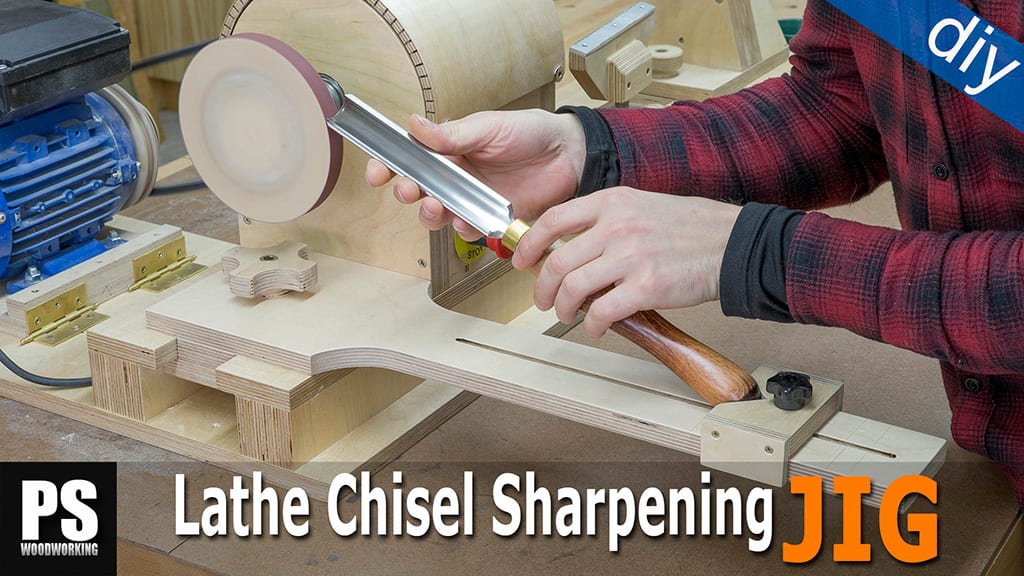