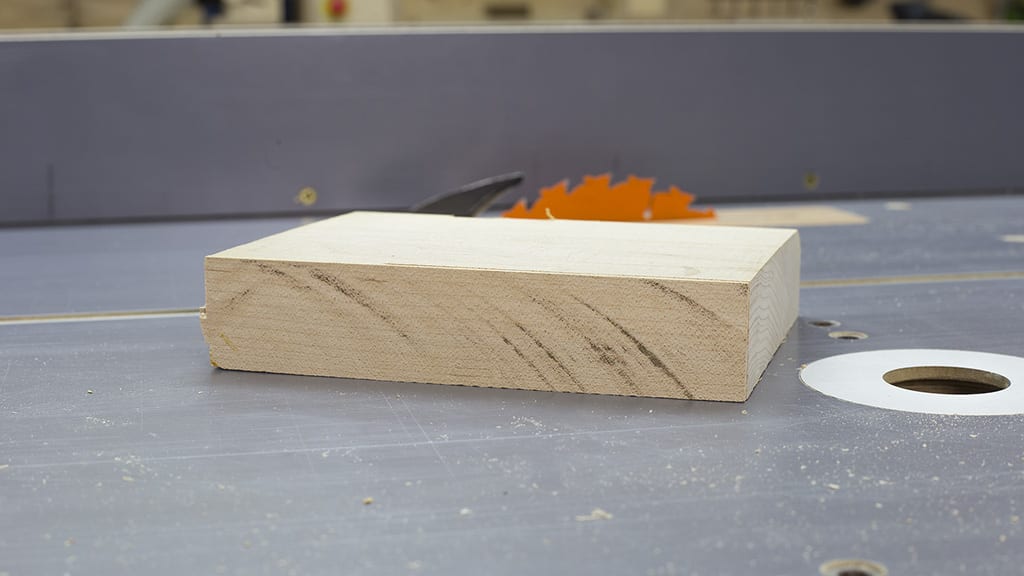 After several months of use, all of my table saw blades need to be sharpened. After cutting this piece of maple wood, you can see that the cut isn’t as clean and accurate as it should be.

Because of the price of the blades I normally use, there is no point in having them sharpened, because it would cost nearly as much as the blades themselves.

For that reason, I bought three or four of the same blades every time I needed to have a sharp one, but now that all of them are dull and I don’t want to keep buying blades, I’ve thought about making a jig to sharpen them at home. 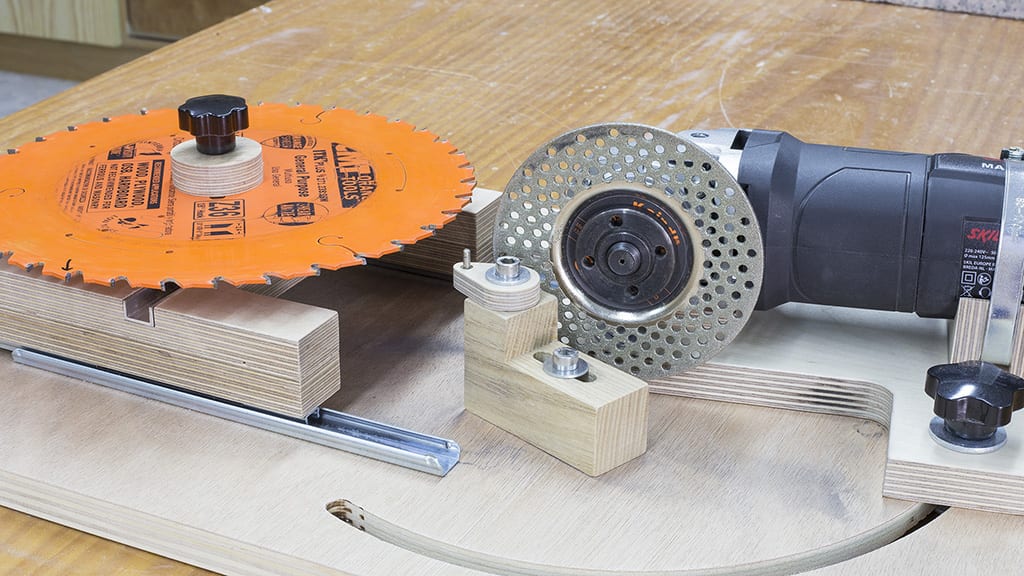 I’ve attached a diamond wheel to an angle grinder. At first I thought I might be over-revving it, but after a few tests it seems to be working as intended. I’ve also used two drawer slides for more accurate movement.

I took the size of my blades into account when designing it, and the same jig will allow me to sharpen blades ranging from 165mm to 300mm, which are the biggest I own. 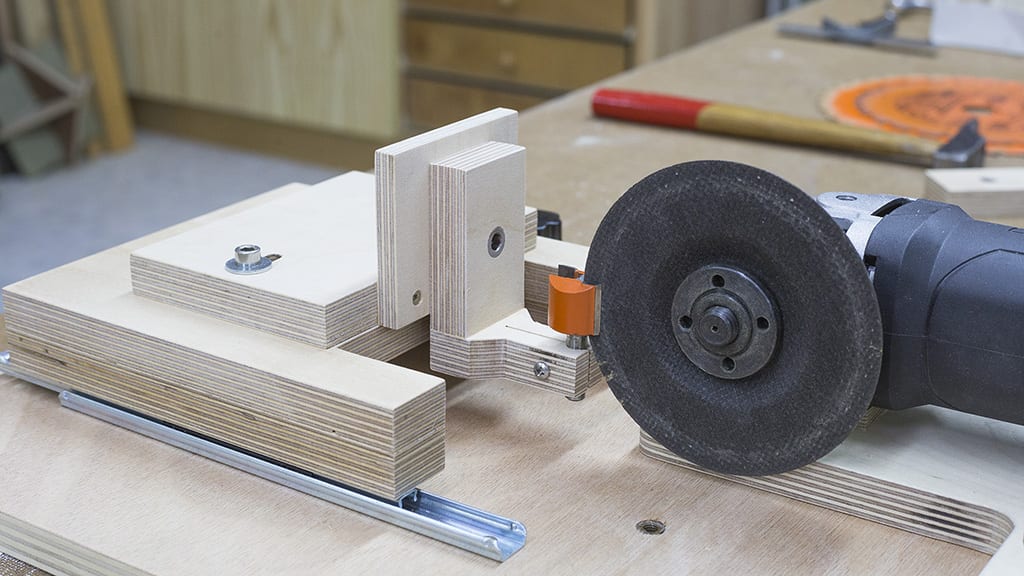 I’ve also developed an attachment for this jig to sharpen my router bits, but since this is a rather long process, I’ll make another article to explain it. I’m planning on sharpening wood and metal bits with this jig, and at some point down the line I’ll definitely try to develop another attachment for that. 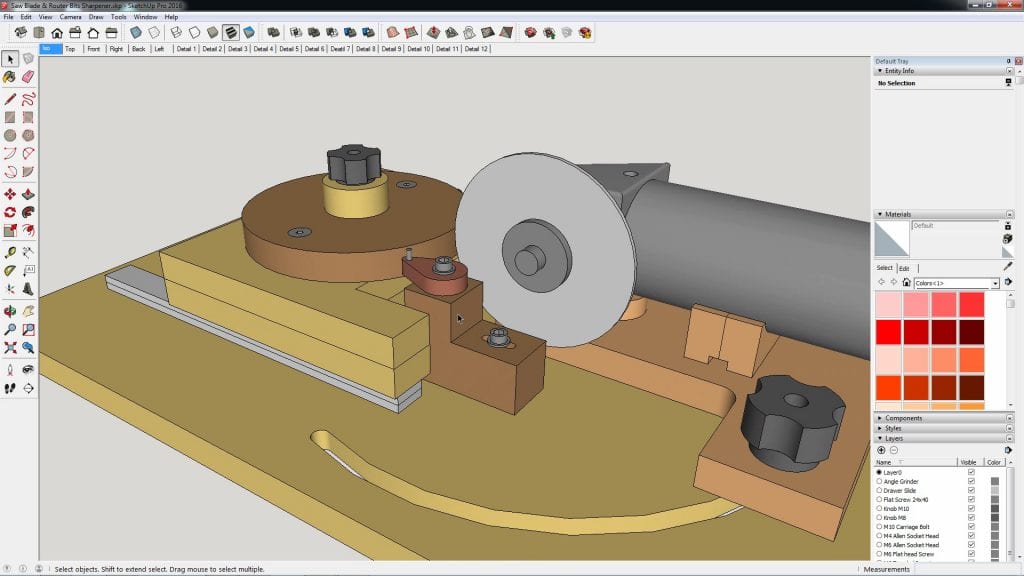 This is the 3D SketchUp file that you will find in the plans. If you are interested in making your own jig and collaborating with my work, here you can download them.

How to use a saw blades sharpening jig:

I’m going to show you how to use the blade sharpening jig. First we have to clean the blades with industrial degreaser and a brush. By doing this, our blades will cut better, but if we only do this, the blades will wear out too quickly.

Now we mount the blade on the jig. I’ve used an adapter that comes with the blades as an axis of the saw blade. I also used a knob as a safety measure, ensuring the blade won’t pop off the jig.

Thanks to a slot I can adjust the diamond grinding wheel according to the incline of the teeth of each blade. We must spend the time necessary to calibrate the jig and adjust it to the blade we need to sharpen, this is the most important part of the whole process.

The jig also has a depth stop, which speeds up the sharpening process and makes the jig safer.

The last step is to calibrate the blade rotation stop. I made it with hard wood and a metal shelf support pin. Thanks to this set-up, the grinding disk will grind down all the teeth evenly, improving the sharpening process.

Once the jig has been calibrated, we mark the first tooth to find out where to stop, and little by little we sharpen the entire blade. Although the blade teeth have several sides with various angles, just sharpening the inner side is enough, which is what I’m doing. Don’t forget to wear eye protection and a good dust mask.

There are also blades where the teeth have alternating incline patterns. In these cases we can tilt the round piece on which we place the blades as needed, before screwing it to the sliding table.

Then, we must sharpen every other teeth on the blade, and after that, tilt the disc towards the other side and sharpen all the teeth we previously skipped.

It feels much sharper to the touch, but I’ll do some cuts to a piece of maple wood to make sure, and it cuts much better. This jig will save me a lot of time and money!

I’ve noticed this diamond disk is quite coarse and the teeth aren’t as smooth and straight as I would have liked, so I’m thinking of buying another diamond disk with finer grit to complete the sharpening process.

How to make a saw blades sharpening jig: 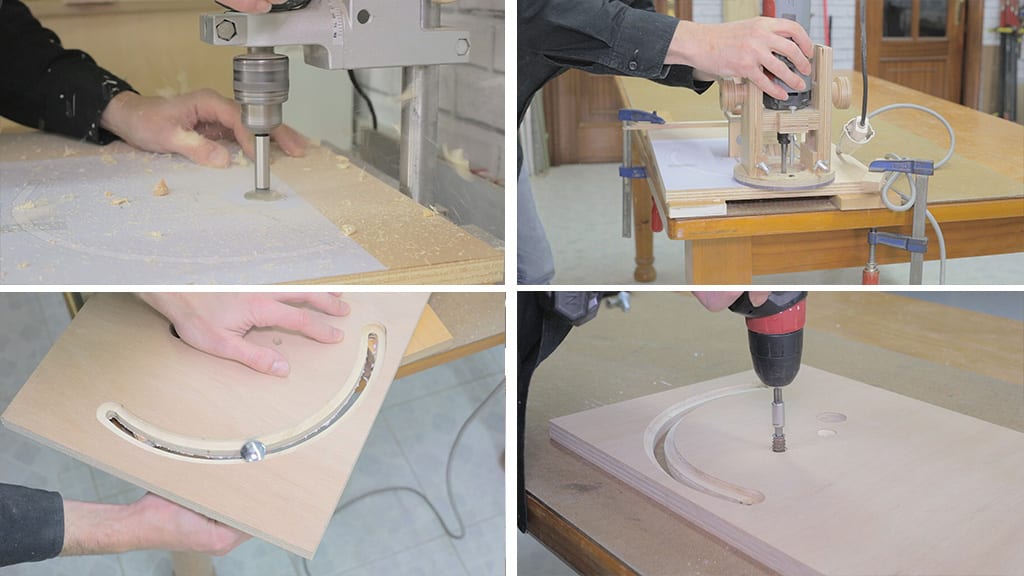 Now let’s take a look at how I made the jig. First I print the templates, which I then glue to the plywood. I drill all the holes with the column drill. On the underside of the board I drill these holes which will be the ends of the rotation groove.

Using the plunge router, I make the curved rotation groove. I’m going to use a carriage bolt so that it won’t turn when tightening the knob. 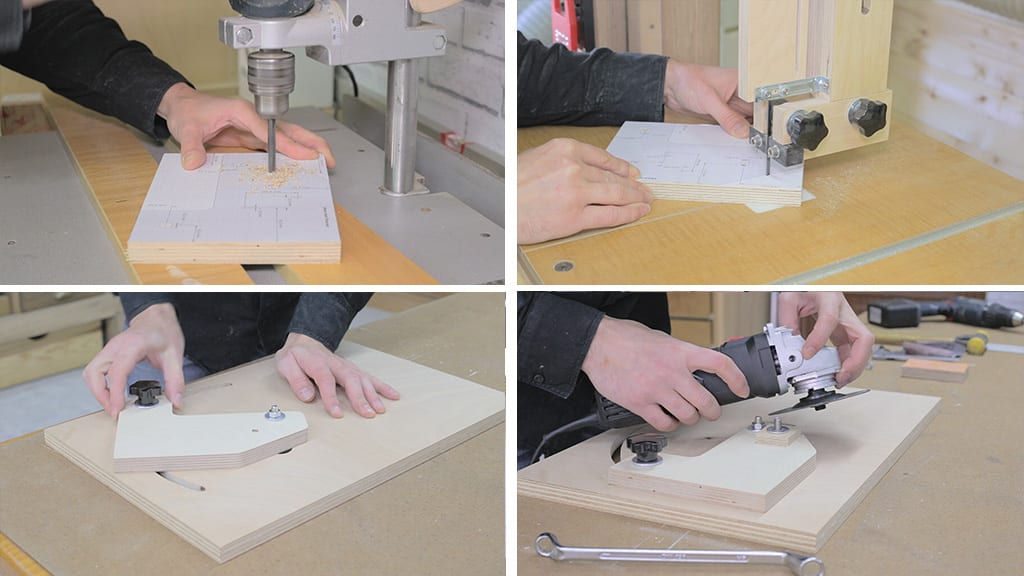 I drill the rest of the holes on the jig’s base and place the necessary threaded inserts. Now I’ll make the piece where the angle grinder will go. I’ll also use a printable template in this case so that it’s easier to machine.

I fasten the screw that will act as a pivot, and even though you can’t see it in the video, I’ll use a self-locking nut here.

I’m going to glue a small piece of plywood to act as a separator for the angle grinder, and make sure the grinder’s wheel is properly aligned with the base of the jig, because this depends on the head of the angle grinder itself. If it is not a perfect 90º angle, we can easily make up for it thanks to the part I just attached. 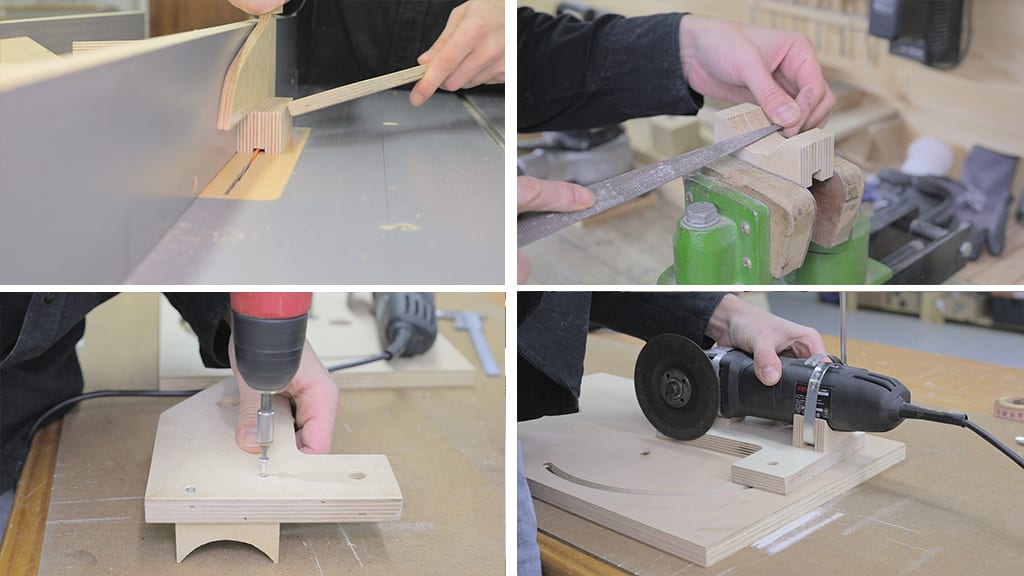 I make the final adjustments by hand and with a file. I screw the piece in and put the angle grinder in its place. 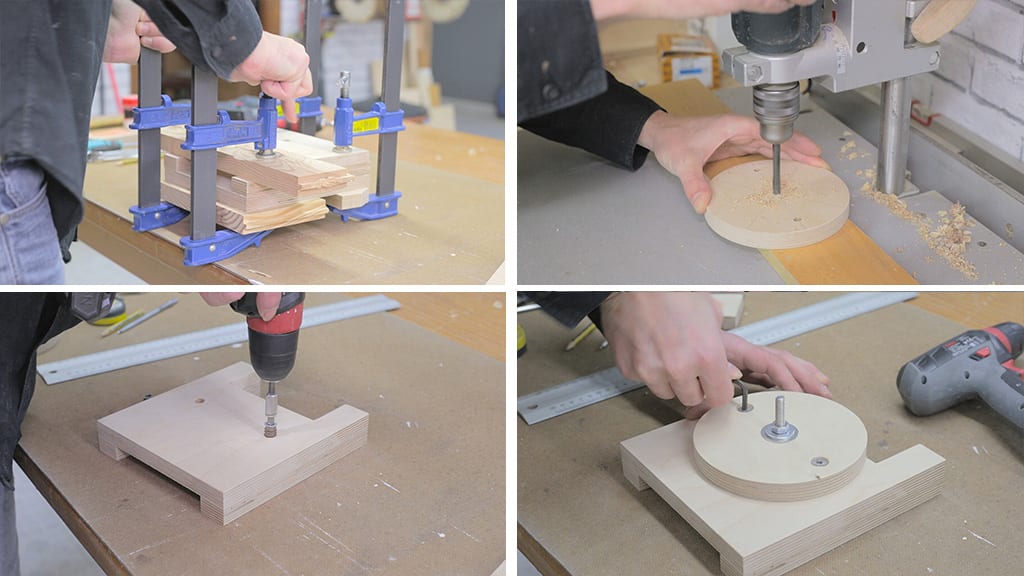 Now I’ll make the sliding table. I cut all of its parts and glue them together. With the band saw, I cut a round part where the blades I need to sharpen will go. I drill all the holes, and screw it to the sliding table. 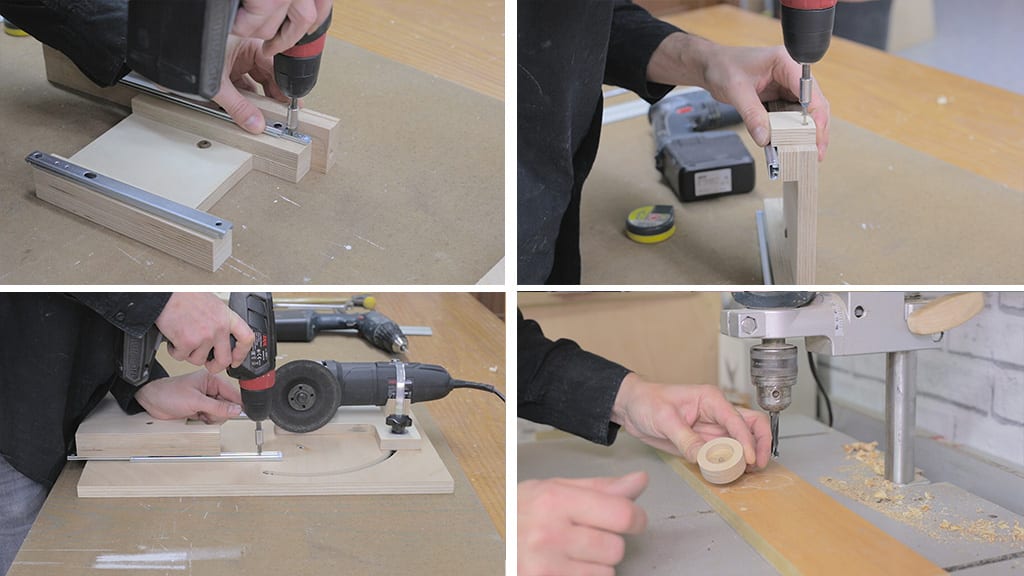 I screw both drawer slides to the bottom of the sliding table. Before moving on, I screw in a small part that will serve as a depth stop(second photo). Now I find the exact position to screw in the slides to the base of the sharpening jig.

With a piece of plywood, I’ll make the part that will hold the blades on the sliding table(fourth photo). 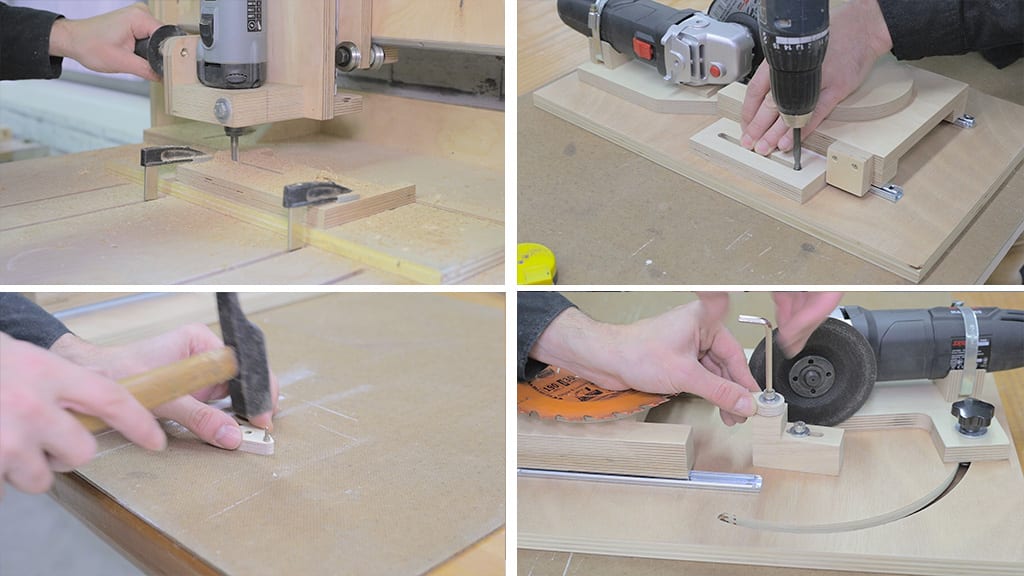 I finish machining it on the band saw and I also make a piece where I’ll put the shelf support pin to function as a stop for the disc. That’s all for today!