Martin Purdy wrote:
hi, I finished my router/saw table a while ago and I've already used it a lot! It needs some things doing to it, but works great as it is. 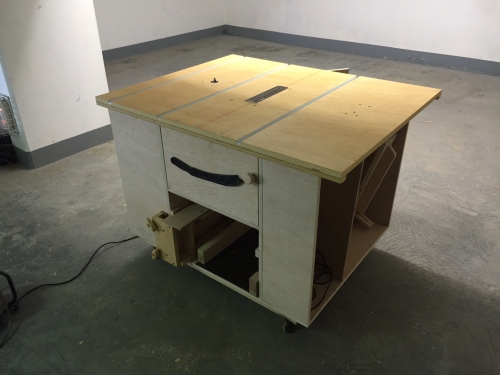 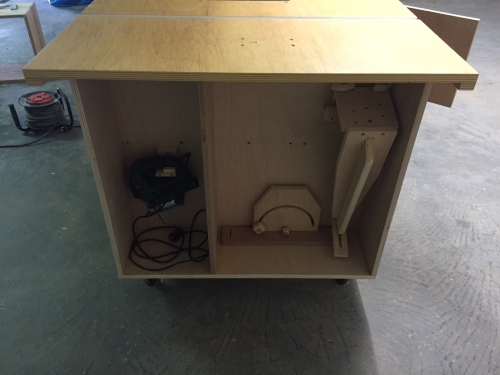 Storage below the jigsaw end. You can see the guide for the jigsaw and the mitre gauge. This is not accurate enough to be honest so I'm going to make a better one that works like a cross-cut sled in both guide rails for more stability 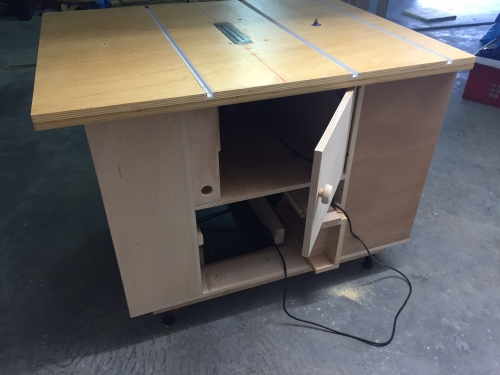 The other side of the table. As you can see, I haven't organised the wire, or managed to buy a Hoover or dust extractor, so for now the door stays open.

Storage beneath router - same thing with the wire. As you might be able to see, I have just (badly!) cut a hole in the table top - I need to make some inlays with various hole sizes but I haven't got around to doing it yet.


The router I'm using. It's a horrible old cheap thing that is awkward to set the height and change bits, but it works. It's what I had, and I still don't have the money to buy a proper milling machine, but when I do I'll be changing it!!

Round-over bit and fence. If I had a vacuum it would be attached for dust removal!

Fence and saw blade. This works beautifully. You can see the white aluminium channel doesn't sit perfectly straight in its groove - that's because I had to fiddle with it and change it by half a millimetre about five times before I managed to get everything perfectly parallel.

My box joint trimming set-up - it just slots over the fence and allows me to flush-trim box joints.

Cross cut sled. Again it took a lot of messing around to get it perfectly at 90° but now it works great.

Key for box joints - it's a piece of 4mm steel bar that I have, filed down to the thickness of the blade. The little bit of ply holding it on was supposed to be temporary, just to see if it worked, but it holds it so well that I left it, even though it's wonky!

Jigsaw, with guide. The guide slots on the same way as the fence, but to be honest I use the jigsaw without the guide about 75% of the time. The "bearings" are simply 8mm washers. And the bolts are screwed straight into the wood, into a hole 1mm too small.
Again, you can see that I haven't yet made a cut-out with an inlay, and until I need to make a 45° cut in a curve, I probably won't!

And here's the stackable, interchangeable boxes I made yesterday, exclusively on my table saw (apart from starting the hand holes with a drill!). They're for jumping on or doing step-ups, or anything else in the gym, so they have to be strong, hence the box joints. They come apart into four pieces plus the removable lid.

So there we have it. Basically I didn't have much money so I had to do everything as cheaply as possible. I used a McAllister 235mm circular saw (Castorama or B&Q own) for the table saw. I already owned this, but hadn't used it much. Now it's probably had at least 100 hours of use on pine flooring (horribly wet!), hardwood, and ply, and still works perfectly.

The table top is not hardwood ply - that cost way too much. I gave it about 6 layers of varnish but it's still not as hard and smooth as I'd like. You can see that the rest of the table isn't varnished - varnish costs a fortune in France!!

Wiring is my biggest issue. Currently I have the router and saw wires coming out of the table and lying on the floor next to my extension cable, and to turn either one on I have to plug it in, and yank it out to turn it off. Sorting out a switch and tidying up the wires is probably my next job...

And the plans were great. The cutting diagram was very handy - I simply handed it to the guy at the wood yard - but unfortunately he wasn't all that accurate! And all the other bits and pieces I made from offcuts that they give me for free.

As I said before, the only thing that was really confusing was that you have me a list of nuts and bolts to buy, but then didn't tell me where they all went! So I bought a bunch of nuts and bolts and then ended up improvising and guessing, and only using half of them!

Anyway I'm very happy with my table saw, and I use it every day. In total I spent:
€160 circular saw (already owned)
€0 router (gift from friend)
€0 jigsaw (stolen from my dad years ago)
€200 plywood plus bolts, feet, etc.

And it took me a couple of days to make, a week or so to varnish, and about a month of fiddling for it to be eventually straight! Haha

Hi Martin,
Very well done! seems a very professional work. I'm happy to see this pictures and I will try to improve more the plans!
Top