This is my latest project, a modular workbench with great storage capacity that can also be used as a mobile tool stand. It's built using the same system as the Multi-Function Workbench I made few weeks ago, but this one is smaller, about 1m long and 60cm deep.

Rather than making it by cutting away, we'll be joining parts together. 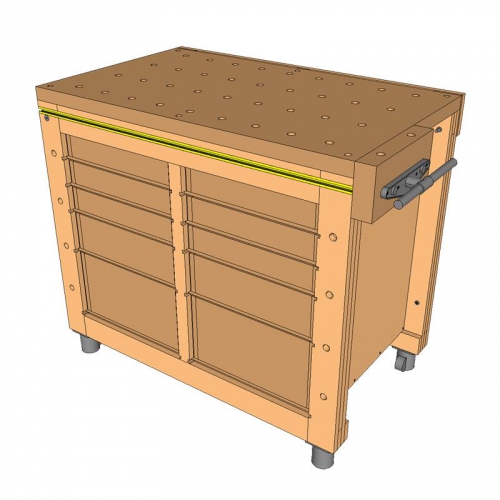 Making a modular bench was my first idea when I built the Multi-Function Workbench, and since some of you have requested plans for a similar but smaller bench that can be adapted for use in workshops with limited space, I've decided to go ahead and make one.

Since it's modular, you can try different combinations. You can make just one, two that are separate or joined, three or even four. For now I'll build two, though later I might make more. 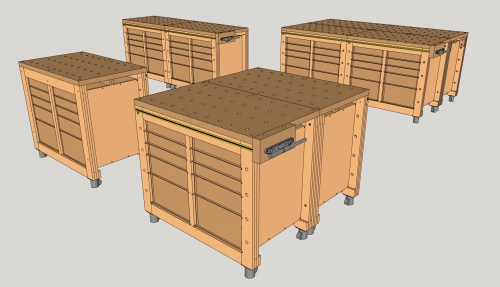 Today I've glued all the pieces that make up each part of the frames using a nail gun and clams, and here is a frame together!


Then I cut the cabinets of the workbench. I've also cut the grooves that will act as slides for the drawers. Now I can glue the cabinets and frames together.

Finally I'm gluing the cabinets and the frames together. I've used wood glue but I think that screws could work too...

Making the modular workbench joining system. In the second photo you'll see one of the pieces to join the modules. That piece will be hidden inside the modules. I'll use threaded inserts and bolts.

Today I made the holes for the bolts that secure the top to the frames of the workbench.

Cutting the groove to insert the T-track in the front of the two workbenches. I've used a plunge saw and its rail guide, and also some pieces of wood as a jig so that the milling will be the same in both benches.

Today I made the pieces that will join the modular benches together. After shaping them with the band saw, I've placed them on the frame to mark the holes in the frames.

I can finally install the vise of the modular workbench. I'm going to install a new kind of gear-driven vise invented by @aklein2303. I'm sure it will be the perfect complement for this modular bench!

Testing the twin turbo vise that I've installed on my modular workbench. Both speeds works fine!

Making a chamfer to the workbench dog holes, this small hand router makes the process easier!


I've finished varnishing the drawers bottoms. To make all the parts of the drawers I used for the first time eucalyptus veneered soft plywood, and I've noticed that it is a nice wood!